Pixy2.1 alternates between no response error and actual data

Currently setting up a pixy 2.1 with an arduino uno and i have this weird behaviour when running the ccc_hello_world sketch where the data on the serial monitor flickers between no response and actual data.

I have setted a big object that is stable but in the serial monitor i get on cycle with actual data, and after that a lot of no response errors, than again i get a cyle of real data and it keeps repeating. 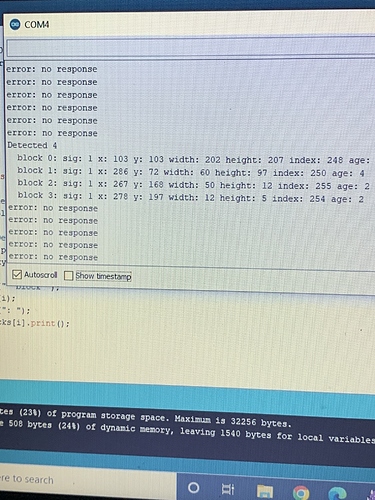 I already update the firmware to the latest version

Any ideas on why i get those no response errors?

Hello,
The “no response” message is only printed when there’s a communication error. This shouldn’t happen under normal circumstances, so you’re correct in being concerned. Can you describe your setup? Is it just an Arduino and a Pixy connected via the supplied Arduino cable? How are you powering your setup? Are there other things hooked up to the Arduino or Pixy?

A faulty cable or connector could be behind this kind of behavior. Have you tried the unscientific test of jiggling the cable or pressing on the connectors?

Both are powered via USB. Nothing else connected to pixy and to the arduino i have a bunch of leds, 3 ultrasonic sensors and a l298n motor driver.

The leds, sensors and the motors are working fine. Also tried the “jiggle” but same behaviour.

If no ideeas pop, my last one would be to remove everything from the arduino and try to run just the camera and the board, but i would like to avoid that as much as possible.

Hello,
If there are things connected to the Arduino, bear in mind that some of I/O signals can be shared with the ICSP signals (e.g. MOSI, MISO). What Arduino are you using?

Arduino Uno. Will try to remove the MOSI, MISO and SCK pins and provide feedback.

Thank you for the help.